This should be the final blog about the construction of the Tichy Pittsburg and Lake Erie rebuilt USRA 40 foot 50 ton capacity box car. I am finally complete to the point of diminishing returns for doing any more. I could have added air hoses and a Carmer lever uncoupler but that would take me weeks at my current pace.  I have Yarmouth Carmer lever etchings but the attachment is quite fiddly. Ask long as I am leaving the coupler trip pin on the couplers an air hose connection would sort of look redundant. 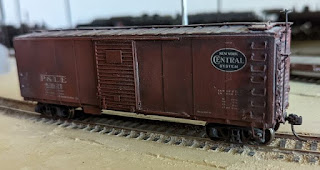 The object attached to the sill just to the left of the door on this side only is a NYC cover for the AB valve. It is fairly common on 1950's NYC system box cars. I have not seen it on any other roads.
Nearly everything added to the model came from Tichy although not in the kit. The grab irons are Tichy 18 inch drop style and the sill steps are from a separate set. The NYC decals are from National Scale Car as are the chalk mark decals.
The paint process started with a Tamiya grey primer coat that was used in construction.  When I was satisfied with the boxcar's body I used the Tamiya red oxide primer as the base box car read coat. The car was then decaled.  I then hand brushed diluted wash coats of Vallejo Panzer Aces #302 Dark Rust until it reached a dirty dark color representative of steam era freight cars. The running board was washed with Vallejo 71.121 Light Gull Grey to achieve more of a weathered wood effect. Highlights to the running board were added with diluted Vallejo Panzer Aces #310 Old Wood. I used Vallejo's airbrush thinner to dilute the paint instead of water.
The trucks were a bit of a problem to find. There are lots of versions of Andrews 50 Ton trucks in HO. But the closest match to the prototype is a now out of production Proto2000 truck. I managed to locate a 2 pair on eBay at a reasonable price (less than new Tahoe trucks.) It was fortunate I bought 2 pair as the side frame broke off one truck while testing to see if Tangent Code 88 wheel sets would fit.  In the end they didn't as the axel was a bit loose in the Proto2000 trucks and I went back to using the wider wheelsets that came with the truck.
The car is not quite correct as there was a significant error in placement of the reporting marks on the side shown. The previous blog post covered some of the problems of construction. But now It is ready to be shown publicly. If my mojo is right I will take it to our local RPM meet, the Bay Area Prototype Modelers meet this Saturday in Richmond, California. I just have to type up a description.
Note on the photo. I am working with my new phone camera on a Pixel 6. I am also working on modifying the color saturation of photos that I am publishing.
This is a builders photo of the original rebuild fresh out of the shop as it was originally lettered for the PMcK&Y. It was re-liveried for the P&LE and New York Central System about 1940. 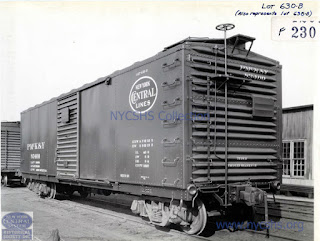 Photo from the NYC Historical Society Collection
As Porky Pig would say at the end of a Walter Lanz Cartoon film....Thaaats Aaalll Folks
Posted by Ken Adams at 1:49 PM